The Gnome and Mrs. Meyers Chapter 6 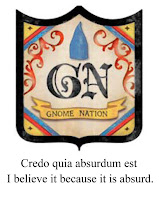 In this chapter: Mrs. Meyers finally gets to ask the gnome some in-depth questions about his background. He shares the story about how the gnomes managed to vanquish the Trolls, a hideous race of beings who terrorized and killed gnomes for sport. The final time the Trolls showed up to ravage, the gnomes were ready with an ingenious plan.

Listen to the episode on Podiobooks.com.

Caption for this chapter's illustration: The Gnome Nation Emblem.
Posted by Randy at 8:00 AM

The Gnome and Mrs. Meyers